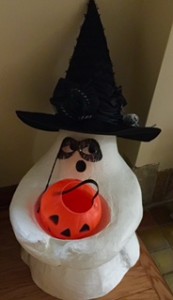 In my upcoming Middle Grade Fantasy, FROM THE GRAVE, (Fall of 2016 from Jolly Fish Press) one of my favorite supporting characters is Stan & Dan, the two-headed gargoyle. This creature, like Frankenstein Frightface Gordon—the hero of the story, is a misfit.

Stan & Dan, the goofy gargoyle, tries to fit into a world that doesn’t think monsters should be funny (or quiet, or neat, or anything other than monsterly.) Both gargoyle heads are master jokesters—often trying to one-up the other.

STAN: Why do skeletons go the grocery store?

Yep, these two just can’t help themselves from telling giggly gotchas, no matter how hard they try. I guess a two-headed, green and ghoulish gargoyle clown is still a clown. Right?

Here in St. Louis it’s nearly time for all our local ghoulish clowns to come out for their big night. Halloween trick-or-treaters in the Arch City are ALL jokesters like Stan & Dan. St. Louis is one of only two major cities in the U.S. (Des Moines, Iowa is the other) that expects their Halloween trick-or-treaters to tell jokes before they receive their treats. A funny one-liner, riddle, or even a knock-knock joke is expected from each costumed-clad child on October 31. 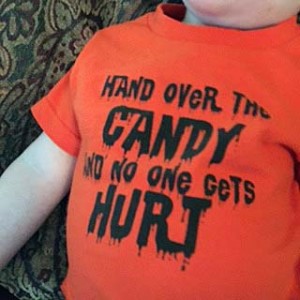 How did this stand-up routine become part of two local Halloweens? Well, it turns out that back in the Depression era (1930’s) in Des Moines the local hooligans were doing too much vandalizing on trick-or-treat night. In an effort to stop the destructive behavior, the city encouraged tricksters to tell a joke, rather than play a prank. Perhaps it was for a similar reason that St. Louis (just south of Iowa) adopted the tradition too. Or another possibility for the custom here could stem from the St. Louis’ large Irish population. The Irish had an even older Halloween practice of performing for a treat.

Going door-to-door on the eve of Hallowmas (November 1—All Souls Day), they would offer prayers and songs for the dead in return for treats. This custom dates back to the Middle Ages. In Great Britain and Ireland, this yearly practice was called “souling.” In Scotland by the end of the 19th century, “guising” was popular. Costumed people would carry scooped out gourds with lights and go door-to-door hoping for treats. Still today in Scotland, Ireland, the United Kingdom, Canada, Puerto Rico, and parts of Mexico, Halloween “trick or treating” is popular. But it is the United States that boasts the largest Halloween festivities in the world!

If you’d liked to up your comedic game this Halloween, check out my daily MONSTER JOKES on Twitter (@cynthiareeg) and on Facebook (https://www.facebook.com/CynthiaReegAuthor). 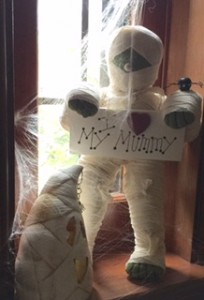 And be sure to visit my blog on FRIDAY OCTOBER 30, for a list of 100 FRIGHTENINGLY FUN JOKES! Don’t miss it!!!