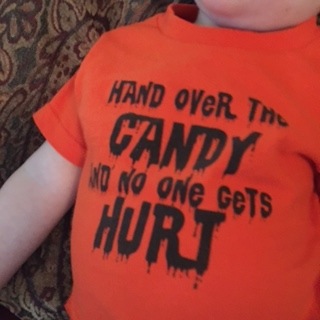 Halloween isn’t only scary. In some Midwest towns, like Des Moines and St. Louis where I live, Halloween is silly too. The tradition of telling a joke before receiving a Halloween treat began in Des Moines during the 1930’s. Kids were encouraged to recite jokes rather than resort to destructive “tricks” like up-ending trash cans or breaking street lights. The goofy ghoulish joke tradition stuck for Des Moines and its suburbs.

In St. Louis, the origin of the popular joke-telling tradition is harder to put a skeleton finger on. (Sorry but I had to throw that one in. This is story about silly jokes after all.) Both the Irish and the German immigrants to the area in the nineteenth century had practices of going door-to-door and performing for a treat. The Germans did it on New Year’s Eve. In my mother’s German heritage in central Kansas, they called this tradition “winching.” They would sing a song and wish the household a “Happy New Year” for a coin or two.

In Ireland, they celebrated an ancient celtic festival of Samhain each year to prevent the people who had died during the year from returning from the dead. One particularly evil dead creature, “the Muck Olla,” did return each year.  In order to keep it away, the Irish would dress in costume to confuse the creature. By going door to door and asking for a treat, each person would have a treat to give the Muck Olla in case it caught them. To receive a treat from their neighbors, the costumed Irish would tell a joke or recite a poem.

A researcher from the Missouri History Museum, Sharon Smith, purposes that the tradition evolved in St. Louis from the combination of such “Old World” influence as mentioned above and the thriftiness of the German immigrants who expected something in return for handing out their candy. Originally it could be a song, a poem, a dance, or a joke. The joke is what has stuck in St. Louis. It makes for a very entertaining night of opening the front door to cleverly-clad ghouls and goblins of all sorts.

The first recorded use of the words “trick or treat” appeared in a publication from Blackie, Alberta in 1927. By the 1930s, Halloween was much more widespread, but even in the 1940s many considered it begging and wouldn’t participate. Thank goodness that fear no longer exists. And of course, it’s totally not begging when each ghoul earns his/her treats with a clever—and usually corny—joke.

For a lit of 100 Halloween Jokes, visit this link on my website.