Oftentimes When I Start Writing a Story…

There will be a good guy versus a bad guy. My fantasy FROM THE GRAVE seemed pretty straightforward in this respect with Frankenstein Frightface Gordon—a less-than-monsterly monster—as the good guy. Malcolm McNastee—a true blood troll on a mission to end misfits—seemed the obvious bad guy. But then, as I dug deep (please forgive the obvious cemetery allusion) into the story, my characters started revealing who they really are. Their quirks and shortcomings. Their fears and failings. And of course, I love them all the more for it. 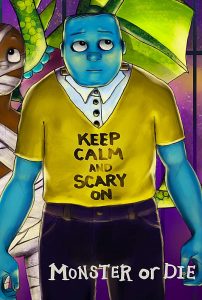 While Frank maintains his good guy persona, he’s not without his numerous shortcomings. He has a quick temper that he’s tried to put under wraps, which sometimes causes him to be too cautious. He doesn’t initially lead the charge to stand up for exiled misfits. Rather he must be convinced by Georgina—a dragon without a trace of fire—and by his dear, departed granny—from the grave!

Malcolm, on the other claw, isn’t a totally tough creature. He has a big soft spot for his little sister, Nelly, who exhibits some disturbing misfit traits. Plus, Malcolm has his own secrets to hide—secrets that would destroy his perfectly gruesome image. One of Malcolm’s favorite sayings is “Less thinking and more monstering.” But that is not always easy to do. In fact, being a monster is far from easy but wonderfully entertaining, as I hope you’ll discover in FROM THE GRAVE coming October 18 from Jolly Fish Press. 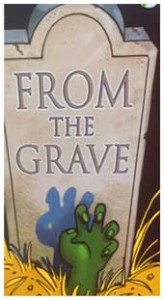 For more information on creating characters and details on FROM THE GRAVE, visit these What’s New blog posts: