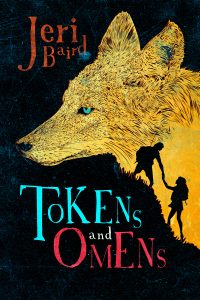 As soon as I read the prologue for this YA fantasy, I knew that I was in for a memorable adventure.

“I am called by many names. Destiny, Fate, Fortune; however

I prefer Moira, for it sounds as if I have a heart. I do not.”

I also like that the story is told from dual points of view, Zander—a sixteen-year-old boy who too often hunts on the elders’ forbidden lands for pelts to aid his drunken father’s business. And Alexa—the sixteen-year-old daughter of a baker who vows to do better for herself than a life of bread. The two find themselves bound together in a most astounding way.

The fantasy quickly unfolds with numerous twists and turns. The annual quest to test the merits of each of the village sixteen-year-olds is six months away. Zander and Alexa are thrown into class with the others and quickly learn survival tips from the priest and fortune teller to prepare for the five-day forest ordeal. Each individual earns tokens when they do a good deed and earns omens when they display a negative trait. I especially like how the book’s message of individual accountability is woven throughout.

“He wanted to believe he had control over his life.

The quest taught that his actions affected the outcome.”

Both Zander and Alexa make numerous wrong turns along the way and gain their fair share of omens, but Fate also deals them startling twists too. I won’t spoil any of the surprises, but I was pleased to see them both discover their strengths. The villains in the story spur the main characters on to becoming stronger and more focused on the right paths.

“… the real challenge is to our beliefs over who we are and what we want in our life.”

As is fitting in a YA novel, there is a bit of romance, plenty of action, and some heart-tugging loss as well. Ultimately, the powerful theme of the story shines through: “Your life has meaning. Your struggles have meaning.”

Those who enjoyed The Hunger Games should relish this one as well. The good news is that the adventures continue in September with book 2!

Two thumbs up to author Jeri Baird in weaving together this delightful tale with its clever plot and enchanting characters.