To celebrate the launch of FROM THE GRAVE later this month, my publisher, Jolly Fish Press, is sponsoring a contest.

Click on the link to read the details. But you DON’T want to miss out on this!

WHAT are YOU waiting for? Grab your pencil and start drawing!

Time waits for NO monster–Oct. 28 is the deadline to enter.

I can’t wait to see all the AWESOME creations!!! Scary on! 🙂 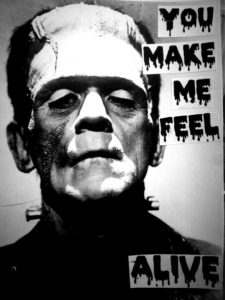 Okay, so I’ve been hanging around with monsters for much too long–and I LOVE IT!

So you still have time to put on your costume and monster mash the night away!

FRANKENSTEIN FRIGHTFACE GORDON from my upcoming MG fantasy novel FROM THE GRAVE (October 18, 2016) is not a typical Frankenstein–he’s blue, prefers a crisp white button-down shirt, and the quiet life.

Still he’s full of surprises, the best of friends, and can certainly pull his weight in a tough situation. BLUE is COOL!

Preorders are happening right now–and an amazing giveaway! Don’t miss your chance to win a MONSTER OR DIE T-shirt.

Follow the link and learn how to make a FRANKENSTEIN CAKE–perfect for today’s celebrations or anytime you want to Monster On!!! 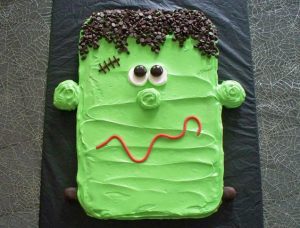 And if you want to make your Frankenstein cake look like my character FRANK, just switch blue icing for the green. Remember, BLUE is COOL! 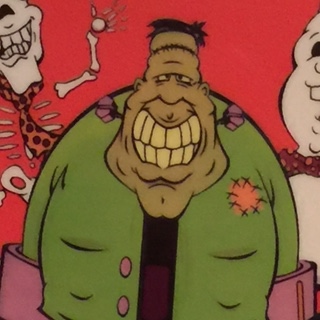 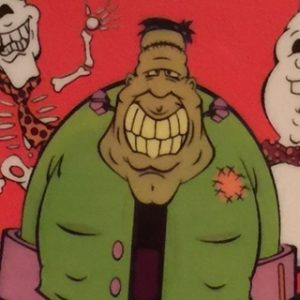 Roald Dahl’s fantasy THE BFG is coming to the theaters on July 1. This is one of my favorite Dahl stories. I remember reading it to my two sons many years ago when they were in early elementary school. We would all laugh-out-loud at the antics of Sophie and her big, friendly giant. This was the type of story I wanted to write for children—one that would entertain and delight them.

Fast forward many years later, as I was brainstorming during a long car trip. An entertaining fantasy story started jelling in my mind. I scribbled down some notes about a world of monsters where a group of misfits was struggling to fit in. Originally, I intended to write FROM THE GRAVE as a beginning chapter book, but very quickly the characters informed me I was wrong. Their story was much too involved. These monsters needed a lot more pages to show off their stuff.

As an author, I knew better than to say “no” to monsters. Instead, I wrote their escapades into a middle grade story with humor, adventure, a fair share of gross-out factor—and plenty of heart as well. Plus, there’s more than a few monster curses thrown in, just to warn you.

I must say that I totally enjoyed the gross-out parts, particularly the monster food. The monster world in FROM THE GRAVE parallels the human world in many ways. But monsters have totally different palates than humans. Creating disgusting monster chow became a daily challenge as I wrote and rewrote the story. “Peppered innards” is one of my favorites.

What cooking in your monster kitchen???

Now it’s your turn to create some delectable (for monsters anyway) food. Pretend you are inviting all your favorite frightening friends for dinner. What will you serve? Perhaps Toasted Eyeballs for an appetizer. Chopped Lizard Gizzards with Gravy for the entry. And Bubbling Brains for dessert!

*Bonus: Write out the recipe for how to make your monster food.

*Bonus: Write a story that has monster food in it. Who’s making and eating the food? Throw in a problem to make it interesting. Remember a story needs:

Watch the STIR UP A STORY slide show on my website for more help.

Starter Idea: Maybe a witch is throwing a party and she can’t get the fire going under her cauldron. What will she do? How do things go from bad to worse for her? Does anyone help her? (Remember: it’s good to have the main character solve her problem as much as possible.)

If you don’t like the starter idea, think up your very own story!

Have fun. Be creative. Don’t worry about spelling and punctuation too much on the first round. But if you want to earn a SUPER WRITER badge, try to correct as much as you can when you read your story over the second time.

Be sure to find out what food is bubbling in the pot in FROM THE GRAVE by Cynthia Reeg. Coming to a cemetery near you October 18!