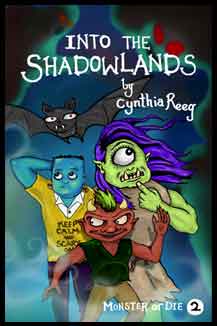 With permission from SCHOOL LIBRARY JOURNAL I’m printing a copy of their review of INTO THE SHADOWLANDS. The review is in their current August issue.

“There’s a little something for everyone here; suspense, adventure, a blossoming romance, and some truly corny humor from a two-headed gargoyle.”

Gr 3-5–Being a misfit monster is a serious problem in Uggarland and can eventually lead to exile or even death. Fortunately for Frankenstein (Frank) Gordon and his nonconformist friends, there is an “Odd Monsters Out” class at Fiendful Fiends Academy, where the eccentricities range from a dragon who can’t breathe fire to a vampire who drinks milk. In this second installment of the series, Frank and his friends have just returned from a daring rescue of two misfits from exile but soon find themselves in another deadly situation. Their class is sent on a scavenger hunt to the Shadowlands, the treacherous divide between Uggarland and the human world, which is full of dangerous animals and malevolent spirits. To make matters worse, Frank’s nemesis, the troll Malcolm McNastee, has been assigned to chaperone the group. Malcolm reviles all misfits and has a very personal reason for hating Frank above all others. There’s a little something for everyone here; suspense, adventure, a blossoming romance, and some truly corny humor from a two-headed gargoyle. VERDICT An approachable read for fans of adventure/fantasy and humor in a school setting. While feasible as a stand-alone, it is optimal to have read the first installment.–Amy Nolan, St. Joseph Public Library, MI