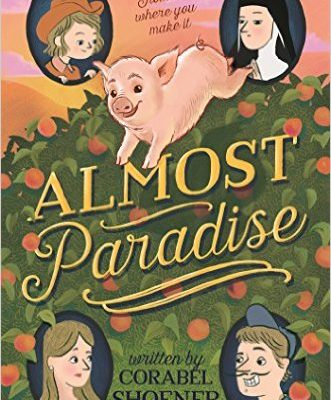 I had the privilege to read an Advanced Reader’s Copy of this entertaining and endearing novel. The story opens with Ruby Cylde Henderson being spirited away (on her twelfth birthday) on a road trip by her mother’s awful boyfriend, Carl—or as Ruby refers to him, Catfish. Her mother is along for the ride as well. Ruby’s sentiments toward her mom can be summed up as, “Mother was no help at all, but don’t hold that against her.” She’s a loving but ineffective mother, which means Ruby often needs to step in to run the show.

When the troop rolls into Little Rock, Arkansas, Ruby and her mother try to rescue a performing pig, Bunny, from the IQ Zoo. Catfish fires rounds from his new gun to implement Bunny’s breakout. As they approach Austin, Texas—and a reunion with her mother’s estranged twin sister, an Episcopalian nun—the trio stops at a gas station. Unbeknownst to the mother and daughter, Catfish proceeds to rob the store at gunpoint. Her mother is waiting in the car while Ruby is walking Bunny, when “Sirens whipped around, churning my heart so hard I grabbed my chest to hold it in.”

Catfish is caught and Ruby’s mom is arrested as well. Ruby manages to stay hidden and proceeds to search for her aunt. With some help from friendly locals, Ruby finds Aunt Eleanor, a mostly reclusive and silent nun, living at Paradise Ranch and growing peaches. After a number of weeks living together, Aunt Eleanor and Ruby begin to communicate. Ruby has finally found stability in her life. She no longer must function as the adult. Even though Ruby misses her mother, she and her pig Bunny have truly found paradise.

But soon Ruby discovers that her aunt is battling cancer. Her aunt takes Ruby to Austin to visit her mother and the lawyer representing her. On this trip Aunt Eleanor faints and must be hospitalized then undergo surgery. An anxious Ruby waits by her beloved aunt’s bedside in the hospital. “Time keeps moving regardless of how you feel about it,” she notes. Ruby feels “as wiggly as a snake on hot rocks.” As she contemplates her circumstances, Ruby gains some perspective on her bittersweet life. “You have to love what you get.”

Aunt Eleanor recovers from the surgery and, with her benefactor’s help, bails Ruby’s mom out of jail. Aunt Eleanor decides to “un-nun” in order to better help Ruby’s mom know how to mother. Ruby watches as her mother learns how to cook and drive and better care for her. The two adult sisters, distanced by time and circumstances, come to a new understanding and a renewed love. “Sometimes we are faced with impossible choices and that is life.”

I don’t want to spoil the surprising ending, so I won’t divulge it here. But I will say how much I loved twelve-year-old Ruby Clyde, who’s “as flat as a pancake” and looks like a boy and hates to wear dresses. I loved her determination and her outlook on life. “Love begets love, even if it is in small flawed pieces.” The author mixes a cast of quirky characters with an engaging plot and colorful prose to create a stunning contemporary middle grade debut novel. The characters and tone remind me a bit of one of my favorite contemporary authors, Kate DiCamillo. So now I’ve added Ms. Shofner to my favorites list as well. Although this is her debut novel, I’m sure she will be penning many more awesome reads in the years to come, and middle grade readers will truly be in “paradise.” This would be a great read aloud for classes or at home. Don’t miss it!