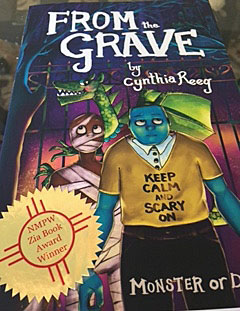 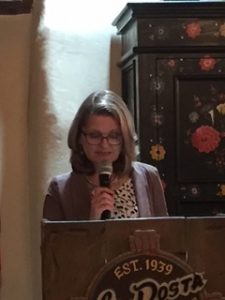 Sharing some monster magic and thanks 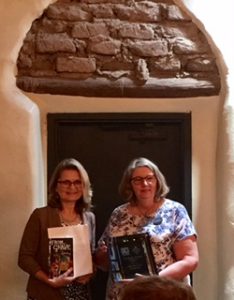 Thank you to Jessica Savage, the Zia Award Chairperson, and to all the committee members who took such interest in my monsters. The Zia symbol is ancient to the people of New Mexico. It represents the sun and is found on the New Mexico flag. The rays of the sun can also represent the four directions–north, east, south, and west or the seasons of the year. The Zia symbol can also relate to life stages–childhood, young adult, adult, and seniors. Thanks again for this awesome honor!

Below is a copy of my acceptance speech.

Thank you so much for honoring my middle grade novel, FROM THE GRAVE as the 2017 Zia Award winner. I’m thrilled and flattered that I was included among such wonderful authors as Joan Livingston and Caroline Starr Rose. And now, if I may, I’d like to share with you some post-truth era insights from my monster tale that I have entitled:

Sometimes fact (and I do not mean alternative fact) is surprisingly close to fiction—or as stated by the publication, Business Standard News: “reality is so strange nowadays it could be true.” Such is the surprising example with my debut fantasy– FROM THE GRAVE, in which Frank—a misfit Frankenstein and Malcolm, an intimidating troll—try to prove they are monster enough. I created this juvenile parody, combining horror, humor, and heart, to focus on issues of bullying and diversity. Why then do I say that this fantasy—complete with quirky monsters of every kind—so remarkably mirrors aspects in our current world?

You see, in Uggarland there is a newly elected president named Vladimir (even in the monster world there are possible Russian ties it seems). Vladimir is intent on laying down the law as he decrees it. In order to be elected, President Vladimir has played on the fears of the masses—and I quote: “Misfits suck the life from our failing economy. I will put them out of their misery before they make each of our lives a misery, too.” The president has found the latest scapegoats to abuse—young misfit monsters slow to change their unacceptable behavior or appearance. With swift action, he’s implementing a new law to banish them all.

And there’s another surprising mirror character, Principal Snaggle, the leader of Fiendful Fiends Academy. With each flick of his furry tail, he’s ready to hide any number of sinister secrets. He’s intent only in adding to his own renown—as can be noted by his coveted Principal of the Year trophy prominently displayed on his desk. The principal aims to make every situation resolve in his favor no matter the fallout along the way. He’s also quick to spin the facts to meet his vision. Let me read you an excerpt of the principal and Malcolm plotting the end of Frank and his friends, as a terrible storm—a Run For Your Lives HORRORCane is coming to the Shadowlands. Malcolm, who tells this segment of the story, has also recently learned that his long-lost father is—of all things—a misfit. :

At last, under the principal’s hypnotic stare, my monster wiles kicked into gear. I leapt from the chair. “I’ve thought of it!”

“Have you now,” said Principal Snaggle, arching his back. “Do tell.”

Leaning close I whispered, “A scavenger hunt for the misfits into the Shadowlands during the storm!”

“My, my, my. Such wonderfully wily ways, McNastee. A young monster any father would be proud of.”

I gulped. Even the principal’s praise couldn’t stop me from smarting at the mention of my father.

Principal Snaggle’s lips slid up toward his slitted eyes. “You and I can see how silly the weather warning is. Blazing bunions! What’s to become of this current generation if we don’t put them in harm’s way? It’s only a bit of debris and havoc—which, of course, may last for days. It’s such a mega storm that even the most seasoned of scavengers wouldn’t blunder into it. Why, of course, it’s a perfect opportunity to test my struggling students.”

“And that they can follow orders,” I added grinning. “Monster or die.”

“Exactly,” agreed Snaggle. “Either they brave a turbulent Shadowlands experience and show they are monsters. Or they run away, proving they’re miserable mutants.”

“Um, sir, a cautious monster isn’t always a mutant,” I mumbled, remembering my barricade last night inside the mausoleum.

“Pfft.” Principal Snaggle waved his claw in the air. “Monster is as monster does, McNastee. We are drawn to mayhem like sloth beetles to the flames. Retreating misfits will certainly reveal their mutant natures amid the chaos. We’ll be able to ship them to Exxillium ahead of schedule.”

“If they make it back, sir.” My tail twitched uncontrollably. My words sounded jittery as well. “I’ve heard whole houses can blow through sometimes. They say once a witch had a house land on her.”

“Monster tales. Just monster tales for little tykes. We’ve all heard them.” Principal Snaggle waved a sharp nail close to my snout. “Don’t believe everything you hear. A tale or the truth. Monsters tend to mix the two up so frequently. But even if the witch did meet her end crushed beneath a bit of timber, what a gallant death. Don’t you think?”

“Yes, sir.” My head nodded so vigorously that my hair tuft bobbed down over my eyes. I envisioned Frank flattened beneath a house. My grin grew wider. “It sounds like a perfect plan.”

Honestly (no alternative fact), I started writing this story a number of years ago, long before the present real life political characters stepped onto the stage. Ironically though, my fantasy was published only a few weeks before the 2016 November election, which set this startling parallel into motion. My story is meant to be a satirical, adventure tale not a thinly veiled caricature of current events. Yet I hope that my monsters can serve as a talking point about the current politics and can open up dialogue about bullying, diversity, inclusion, and cooperation across boundaries—as well as the importance of distinguishing fact from fiction. Otherwise, I fear that Monster Rule #19 will continue to prevail; it says: When the truth compromises monstering, it’s best to lie. If we humans can’t find our way back to the truth, we may all be forced to “scary on!”

Thank you again for honoring my monsters and me with the Zia Award! 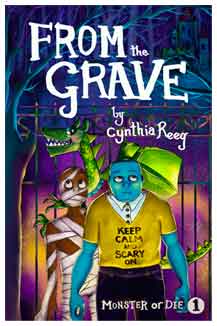 Such exciting news: FROM THE GRAVE is 1 of 3 finalists

for the ZIA AWARD presented each year by the New Mexico Press Women for outstanding literature. I will be reading from my book at the awards luncheon in Las Cruces, NM on April 22, where the winner will be announced–and I will be signing books there as well.

I am extremely honored to have my book chosen for this literary achievement! In fact, I’m feeling as awesome as this breathtaking shot from Ojo Caliente in northern New Mexico–a land of  amazing vistas and endless possibilities! 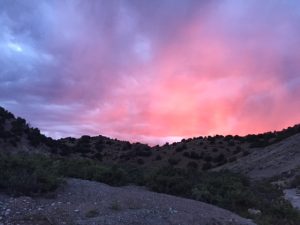